The Creator’s Code Mentors the Entrepreneur in Us All

Amy Wilkinson’s new book draws on interviews from 200 top entrepreneurs who scaled businesses over $100 million or over 100 million served. Includes broad research into views from other disciplines on high-scale entrepreneurs.

Entrepreneurship has always been a staple of the American economy, but the velocity of business development by creative enterprises has accelerated since the web and its parade of related innovation.

Looking at the role of technology and beyond, Stanford Business School lecturer, Amy Wilkinson, spent the past five years at Harvard researching and writing a brilliant book about the replicable skills that helped entrepreneurs initiate and scale the world’s most successful creative ventures.

“The research of the Creator’s Code, is basically out of my time as a White House research fellow,” Amy recently told the crowd in her keynote at the Mid-Atlantic Venture Capital Association’s TechBuzz Spring 2015.  She had moved from Silicon Valley to DC and recalls thinking that the companies that passed through the White House doors were too large to study to get the full picture of innovation in America.  The inspiration for the her book came while attending a party in New York City.

“I went to a party in New York and people from eBay, Gilt Group, Google and a bunch of other Silicon Valley people showed up.  I started thinking to myself even as a public policy person, what if we could crack the code?  What if we could figure out what skills they had so more of us could replicate and emulate those skills.  That’s the genesis of the Creator’s Code.”

The Creator’s Code: The Six Essential Skills of extraordinary entrepreneurs, is an important addition to business literature and education.  It identifies six skills entrepreneurs who have scaled businesses generating revenues over $100 million (or serving over 100 million) use to make great things happen.

This is not a typical self-help business book.  Amy conducted over 200 interviews, and methodically had 10,000 transcript pages reviewed and coded for skills employed, with her insights supported by cross-disciplinary research from sociological and psychological scholars.  Amy is a sociologist with an MBA.  She emphasizes that every single person can create and scale ideas.  A copy of this book should be in the hands of every educator, student, employee, entrepreneur and corporate leader.  It is a gem.

The insights Amy provides into the founders of PayPal, Starbucks, Chipotle, Chobani OPower, DropBox, AirBnB, Spanx, UnderArmour, Uber, Theranos, SpaceX and others instruct as much as they inspire. Their first-person founder stories shed light on the six skills they employ when exploring, launching, and scaling new ideas.

Amy emphasizes: “The principles in this research apply to everyone, whether they work alone or in a large corporation.”

The most effective creators do all of the following six things:

That’s the gist.  The book unfolds with examples that will stay with you and inspire attention to the skills that could fuel your own great creative venture.  Listening to Amy spin these tales is solid gold. 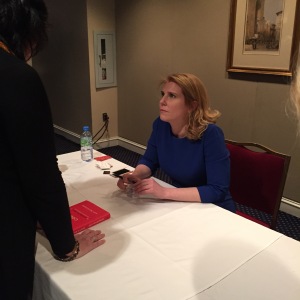 Amy Wilkinson, author of the Creator’s Code, listens carefully to people as they stop by to get their books autographed.

So we’re excited to learn that she will be speaking in DC at 1776 on Thursday, April 23.  If you get to go, please share your comments with us here.