Digital Diplomacy: Power to the People, Even if They Work for the Government 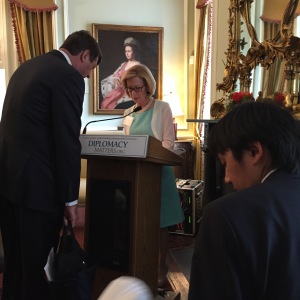 Looks like more of the world is learning to take its relationship with social media to the next level — as an influential tool for governing and diplomacy.

“Last year, our third-biggest event on Facebook globally, behind only the World Cup and the Ebola crisis, was Brazil’s election with 674 million interactions,” said Katie Harbath, who runs the global politics and government outreach team out of Facebook’s DC office.  “…The 2012 election was the first time we saw Facebook really being used by candidates and people wanting to talk with their friends and family about these types of issues.” 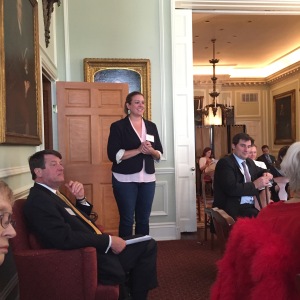 Facebook’s Policy Manager, Katie Harbath noted that “Facebook can amplify everything else you are doing for your organizations.” Writing an op-ed for the local paper? Try announcing at the end you are holding a supplementary Q&A on your Facebook page at a specific time, Katie suggested. http://www.facebook.com/katieharbath

The full house of 60+ influencers, including representatives from nearly 20 embassies, got an insider’s perspective on social media challenges and innovative approaches from representatives of Norway, the Netherlands, Indonesia, Germany, League of Arab States, and Georgia.  Keynotes by Facebook’s Katie Harbath and Vinay Chawla, Director of Digital Engagement for the U.S. Department of State, provided practical insights for optimizing digital presence today and engaging in diplomacy in the digital era.  The State Department’s digital team has about 25 people on 11 platforms with 4 million followers.  “We have to be strategic about what we share on those platforms, but we have to be on every one of them in every key language,” said Vinay.  He added:

Vinay Chawla, Director of Digital Engagement, U.S. Department of State delivers a powerful keynote “The Future of Diplomacy in the Digital Era.” @chawlawala

“A government’s delivery isn’t always about the transfer of goods and services.  In the 21st Century, it might principally be about being heard by the people in charge and what that really affords an ordinary citizen,” said Vinay, who argues that collective action around political parties, religion, and unions appears to be eroding as individuals expect to have a very personal and direct relationship with government through groups they create themselves.

With over 300 social media accounts for all its embassies and consulates, the U.S. State Department seeks to “make foreign policy less foreign” by encouraging all of its diplomats to “be individual voices and take responsible risks” and learning to tell a better story using photos, video, audio, and enhanced texts.

“Facebook is becoming a news publishing platform,” noted Vinay.  “The New York Times is soon going to be publishing on Facebook.  Twitter has video incorporated, whether that’s Periscope or enhanced video.”

A few weeks ago, the State Department told the story of negotiations on Iran’s nuclear program in a series of photos on social media:  First, Secretary Kerry was seen negotiating with his team, then in intense conversation with the P5 + 1 countries, coming out of the elevator at 6:00 am with the Iranian foreign minister, preparing his notes, and taking a moment of reprieve on his own before watching on his iPad the President deliver his speech and the Iranian foreign minister’s talk.  The story wrapped up with the Secretary giving his speech.  CNN used some of the photos in its televised reporting.

“The future’s going to be our diplomats using Periscope to show you when there’s a protest in the places where they operate.  That sort of transparency is what these citizen groups demand and I think we need to embrace it and just be strategic about the way we do it.”

Facebook’s Katie Harbath noted, “The Q&A is something we’re starting to see a lot of elected officials and government agencies do on their Facebook pages.”  She counseled the audience to measure success for social campaigns.  “When looking at your insights, the reach number is important because a fan is worthless unless they’re seeing your content.”

In an effort to engage more individuals, the State Department is adding many more photos and trying to make its blogging platform (“Dipnote”) much more shareable and easy to read.  “Blogging is a way to dispel conspiracy theories as well as conduct diplomacy,” Vinay explained.

“Our job is not only to inform the space, but contest the space,” he continued, citing the duty to inform, contest, and justify its position.  “Audiences are willing to listen directly to governments as a news source.  That’s a big shift.”

Vinay said he recognizes that “there’s a fine line between propaganda and contesting and informing a space.”

So, when the stakes are high and the anticipated trolling gets tough, how do you bring trust into the equation?  Here’s an example:

About two years ago when President Obama wanted to take action on Syria, he instructed the Secretary of State to make a case to Congress and the American people.  Vinay’s team convinced him to do a Google Hangout and engage the country in a conversation rather than relying on the Sunday news shows alone.  Here’s how they arranged to create more of an open dialogue and avoided crossing the line into propaganda:

You can find the May edition of the Institute’s monthly Digital Diplomacy Guide here: http://bit.ly/eDip_May

1 Response to Digital Diplomacy: Power to the People, Even if They Work for the Government